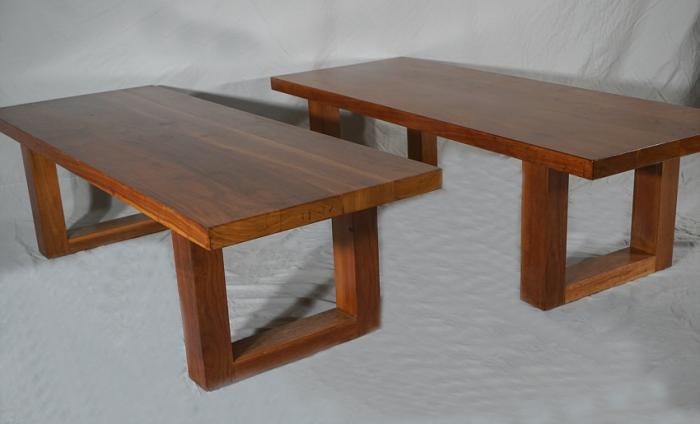 Iconic American architect Louis I. Kahn designed this pair of solid walnut benches for the Yale University Art Gallery in 1953. The benches, classic examples of mid 20th century modern design, each measure 59 inches long x 22 inches deep x 17 inches high. The tops are 1.75 inches thick and the legs are 2.75 x 3.5 inches thick. These are very rare pieces, Kahn only designed about 8 different pieces of furniture in his entire career. Louis I. Kahn designed what has been called the most important piece of architecture of the 20thc century "the capitol complex in Dhaka, Bangladesh". Louis Kahn was born in Pï¿½rnu, Estonia, on February 20, 1901. His family emigrated to the United States when Kahn was a child; he later studied architecture at the University of Pennsylvania and opened his own firm in 1935. His major works include the Yale University Art Gallery, the Kimbell Art Museum and the capitol complex in Dhaka, Bangladesh. Kahn died in New York City on March 17, 1974. We show original pictures of these benches inside the Louis I. Kahn Yale University Art Gallery. As I. M. Pei talks about Louis Kahn in a video, he states he was a great admirer of Kahn, learned a great deal from him and of the two he felt Kahn was the better architect. See the video at https://www.youtube.com/watch?v=a4V0nZZa6xU&app=desktop or see My Father the Architect A Son's Journey a 2003 documentary by his son https://www.youtube.com/watch?v=2JktX-BKOjM.