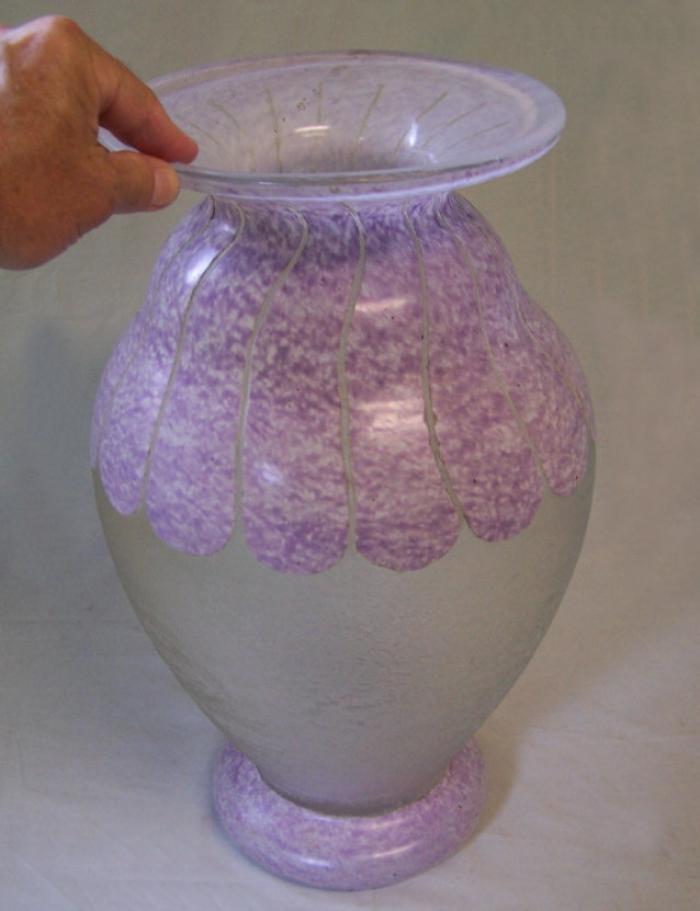 Impressive Degue hand blown cameo glass vase. Measures 17.75 inches high, 10 inches wide at center, and 8.5 inches at its top. Excellent condition, signed on base. Just acquired from a long time collector of Degue art glass. Degué was the brainchild of the enigmatic David Guéron (1892–1950). Born in Turkey to Spanish Jewish parents, he fled scandal at the age of 22 by joining the French Foreign Legion in 1914, only to be sent to the Western Front, where he was wounded and then pensioned out of the army. Following the 1925 Exposition des Arts Decoratifs in Paris, he set up his glassworks in Compiègne, about 50 miles northeast of Paris, to produce tableware and other functional glass. Compiègne had been the site of the Great War Armistice. In 1926, the year after the successful Paris Exhibition, Guéron moved into the more lucrative production of French art glass. He opened Verrerie d’Art Degué in Paris, a glass works at Boulevard Malesherbes along with a gallery at 41, avenue de Paris, to promote the art glass he named “Degué”. His cameo glass designs leaned heavily toward natural motifs, but also featured the brilliant colors that became his signature. His internally decorated vases, lamps and lampshades met instant success. Another Degué line used a sandblasting method to decorate monochromatic vessels with graphic devices and designs. Bio obtained from Artdecoceramicglasslight.com