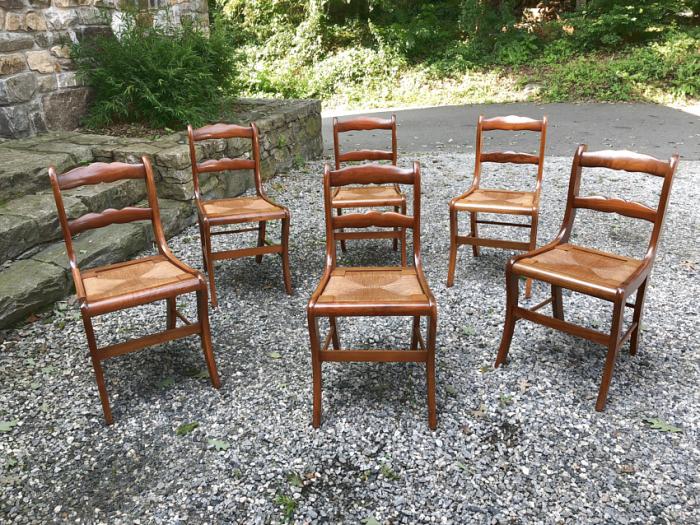 Stunning set of six Federal style walnut chairs hand made by the Amana Chair Colony, established in Iowa in 1855. Each chair was hand built of heavy stock solid black walnut and numbered underneath from 1 to 6. This is a true matched set in pristine condition. Purchased about 30 years ago, this chair style is no longer being made. These chairs are extremely strong, clean and comfortable and have a smooth satin finish. Dimensions: 32.5" H to the back, 18" H to the seat, 15.5" D, 14.5" W across the seat back and 16.75" W across the seat front. The Amana Colony stems from a religious movement started in 1714 in Germany by Eberhard L. Gruber and Johann F. Rock. They had both grown displeased with the dogmatism of the Lutheran Church and began to study the Pietism teachings of Philipp Spenser. The Amana Colonies are 7 villages on 26,000 acres (11,000 ha) located in Iowa County in east-central Iowa: Amana (or Main Amana), East Amana, High Amana, Middle Amana, South Amana, West Amana, and Homestead. The villages were built and settled by German Pietists, who were persecuted in their homeland by the German state government and the Lutheran Church. Calling themselves the True Inspiration Congregations (German: Wahre Inspiration's Gemeinden),they first settled in New York near Buffalo in what is now the town of West Seneca. However, seeking more isolated surroundings, they moved to Iowa (near present-day Iowa City) in 1856. They lived a communal life until 1932.